I recently took over an aging Drupal module, Resource Conflict. It had a D6 version with a lot of outstanding bugs in the queue… I started by simply rewriting it for D7 and my specific use case, but ended up in a discussion with the module’s old maintainer about a total rewrite for Entities and Rules. So that’s what I did, and I just released the 7.x-3.x-dev version.

Resource Conflict USED to be a module that detected booking conflicts in resources, and threw a form error. Resources were node reference field entries, and it supported date and event modules for the date/time. Resource Conflict version 3 is built on Entities and Rules, so the behavior is now totally customizable. This lets it support a wide variety of use cases.

How to use it
Out of the box, the module lets you enable Content Types for resource conflict checking, and you select which date field to use for each enabled content type. You do all this on the Content Type’s edit page. 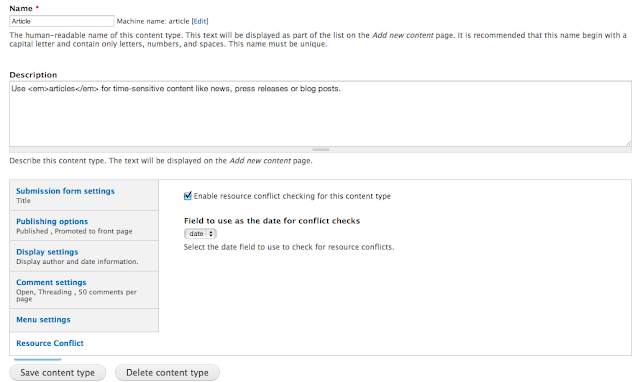 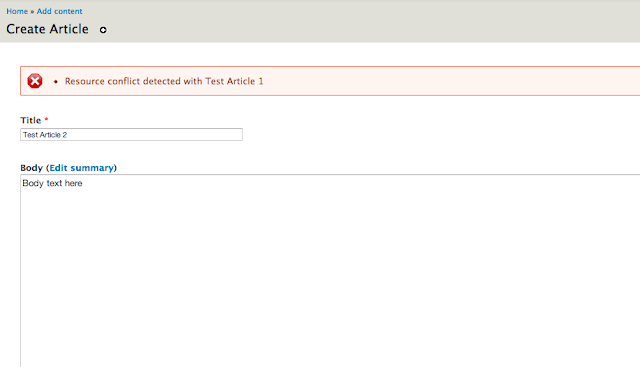 But this is not a very realistic use case. More likely you will want to edit the rule to add some more conditions - for example, maybe a resource conflict on your site means overlapping taxonomy terms. Or entity references. Or titles. Or anything at all!

To give an example of how complex this can go - on a site I recently launched, I have two kinds of resource conflict events. “Hard” conflicts are when two bookings at the same time reference the same user or taxonomy term.  Hard conflicts throw a form error and prevent saving the node. This is just like the above case, and it’s a really simple modification on the default Rule.  “Soft” conflicts are when you try to book a taxonomy term that is a parent or child of a term in an existing booking, or a user who is tagged with a term or child of a term that is already booked. For example, maybe I try to book the taxonomy term “Maintenance”, but the sub-term “Plumbers” is already booked at the same time. Or maybe I try to book John Doe, who is tagged as a “Plumber”, but Maintenance is already booked at that time.  Soft conflicts can be booked, but they create a node to record the conflict.

Other people have asked about using the module to integrate with Organic Groups, or to control bookings of finite resources - you could easily use Rules to build those functionalities. Best of all, it’s all exposed and easy for you to maintain.

Here’s a run down of the Rules components included with Resource Conflict 7:
Future plans
I’m pretty happy with this initial dev release; it solves a lot of problems quite elegantly. But there are a few remaining. Here are the items I’m planning on knocking out first.